Porphyry copper-gold deposits form in a variety of volcanic environments, most commonly in continental margins and intra-oceanic arcs. These are large scale magmatic-hydrothermal systems associated with a series of porphyritic intrusions, which result in extensive alteration footprints that we map and model to target high grade copper-gold mineralization. As in Ridgway Australia (Wilson et al 2003) and Red Chris in Canada (Norris, 2012) , the Hat porphyry deposits form in clusters introducing a unique pattern of alteration, mineralization and geometry. Modeling the geological framework and alteration distribution is underway for our exploration targeting and drilling programs.

Porphyry copper deposits are copper orebodies that are formed from hydrothermal fluids that originate from a voluminous magma chamber several kilometers below the deposit itself. Predating or associated with those fluids are vertical dikes of porphyritic intrusive rocks from which this deposit type derives its name. In later stages, circulating meteoric fluids may interact with the magmatic fluids. Successive envelopes of hydrothermal alteration typically enclose a core of disseminated ore minerals in often stockwork-forming hairline fractures and veins. Because of their large volume, porphyry orebodies can be economic from copper concentrations as low as 0.15% copper and can have economic amounts of by-products such as molybdenum, silver and gold. In some mines, those metals are the main product.

The first mining of low-grade copper porphyry deposits from large open pits coincided roughly with the introduction of steam shovels, the construction of railroads, and a surge in market demand near the start of the 20th century. Some mines exploit porphyry deposits that contain sufficient gold or molybdenum, but little or no copper.

Porphyry copper deposits are currently the largest source of copper ore. Most of the known porphyrys are concentrated in: western South and North America and Southeast Asia and Oceania – along the Pacific Ring of Fire; the Caribbean; southern central Europe and the area around eastern Turkey; scattered areas in China, the Mideast, Russia, and the CIS states; and eastern Australia.[1] [2] Only a few are identified in Africa, in Namibia[3] and Zambia;[4] none are known in Antarctica. The greatest concentration of the largest copper porphyrys is in northern Chile. Almost all mines exploiting large porphyry deposits produce from open pits.

Porphyry copper deposits represent an important resource and the dominant source of copper that is mined today to satisfy global demand.[5] Via compilation of geological data, it has been found that the majority of porphyry deposits are Phanerozoic in age and were emplaced at depths of approximately 1 to 6 kilometres with vertical thicknesses on average of 2 kilometres.[5] Throughout the Phanerozoic an estimated 125,895 porphyry copper deposits were formed; however, 62% of them (78,106) have been removed by uplift and erosion.[5] Thus, 38% (47,789) remain in the crust, of which there are 574 known deposits that are at the surface.[5] It is estimated that the Earth’s porphyry copper deposits contain approximately 1.7×1011 tonnes of copper.[5]

There also appears to be discrete time periods in which porphyry deposit formation appears to be concentrated or preferred. For copper-molybdenum porphyry deposits, formation is broadly concentrated in three time periods: Palaeocene–Eocene, Eocene-Oligocene, and middle Miocene–Pliocene.[7] For both porphyry and epithermal gold deposits, they are generally from the time period ranging from the middle Miocene to the Recent period.,[7] however notable exceptions are known. Most large-scale porphyry deposits have an age of less than 20 million years.,[7]however there are notable exceptions, such as the 438 million year old Cadia-Ridgeway deposit in New South Wales. This relatively young age reflects the preservation potential of this type of deposit; as they are typically located in zones of highly active tectonic and geological processes, such as: deformation, uplift, and erosion.[7] It may be however, that the skewed distribution towards most deposits being less than 20 million years is at least partially an artifact of exploration methodology and model assumptions, as large examples are known in areas which were previously left only partially or under-explored partly due to their perceived older host rock ages, but which were then later found to contain large, world class examples of much older porphyry copper deposits.

The magmas responsible for porphyry formation are conventionally thought to be generated by the partial melting of the upper part of post-subduction, stalled slabs that are altered by seawater.[10] Shallow subduction of young, buoyant slabs can result in the production of adakitic lavas via partial melting.[6] Alternatively, metasomatised mantle wedges can produce highly oxidized conditions that results in sulfide minerals releasing ore minerals (copper, gold, molybdenum), which are then able to be transported to upper crustal levels.[10] Mantle melting can also be induced by transitions from convergent to transform margins, as well as the steepening and trenchward retreat of the subducted slab.[10] However, the latest belief is that dehydration that occurs at the blueschist–eclogite transition affects most subducted slabs, rather than partial melting.[6]

After dehydration, solute-rich fluids are released from the slab and metasomatise the overlying mantle wedge of MORB-like asthenosphere, enriching it with volatiles and large ion lithophile elements (LILE).[6] The current belief is that the generation of andesitic magmas is multistage, and involves crustal melting and assimilation of primary basaltic magmas, magma storage at the base of the crust (underplating by dense, mafic magma as it ascends), and magma homogenization.[6] The underplated magma will add a lot of heat to the base of the crust, thereby inducing crustal melting and assimilation of lower-crustal rocks, creating an area with intense interaction of the mantle magma and crustal magma.[6] This progressively evolving magma will become enriched in volatiles, sulfur, and incompatible elements – an ideal combination for the generation of a magma capable of generating an ore deposit.[6] From this point forward in the evolution of a porphyry deposit, ideal tectonic and structural conditions are necessary to allow the transport of the magma and ensure its emplacement in upper-crustal levels.

Although porphyry deposits are associated with arc volcanism, they are not the typical products in that environment. It is believed that tectonic change acts as a trigger for porphyry formation.[7] There are five key factors that can give rise to porphyry development: 1) compression impeding magma ascent through crust, 2) a resultant larger shallow magma chamber, 3) enhanced fractionation of the magma along with volatile saturation and generation of magmatic-hydrothermal fluids, 4) compression restricts offshoots from developing into the surrounding rock, thus concentrating the fluid into a single stock, and 5) rapid uplift and erosion promotes decompression and efficient, eventual deposition of ore.[11]

Porphyry deposits are commonly developed in regions that are zones of low-angle (flat-slab) subduction.[7] A subduction zone that transitions from normal to flat and then back to normal subduction produces a series of effects that can lead to the generation of porphyry deposits. Initially, there will be decreased alkalic magmatism, horizontal shortening, hydration of the lithosphere above the flat-slab, and low heat flow.[7] Upon a return to normal subduction, the hot asthenosphere will once again interact with the hydrated mantle, causing wet melting, crustal melting will ensue as mantle melts pass through, and lithospheric thinning and weakening due to the increased heat flow.[7] The subducting slab can be lifted by aseismic ridges, seamount chains, or oceanic plateaus – which can provide a favourable environment for the development of a porphyry deposit.[7] This interaction between subduction zones and the aforementioned oceanic features can explain the development of multiple metallogenic belts in a given region; as each time the subduction zone interacts with one of these features it can lead to ore genesis.[7]Finally, in oceanic island arcs, ridge subduction can lead to slab flattening or arc reversal; whereas, in continental arcs it can lead to periods of Flat Slab Subduction.[7]

Arc reversal has been shown to slightly pre-date the formation of porphyry deposits in the south-west Pacific, after a collisional event.[12] Arc reversal occurs due to collision between an island arc and either another island arc, a continent, or an oceanic plateau.[10] The collision may result in the termination of subduction and thereby induce mantle melting.[10]

Porphyry deposits don’t generally have any requisite structural controls for their formation; although major faults and lineaments are associated with some.[10] The presence of intra-arc fault systems are beneficial, as they can localize porphyry development.[8] Furthermore, some authors have indicated that the occurrence of intersections between continent-scale traverse fault zones and arc-parallel structures are associated with porphyry formation.[8] 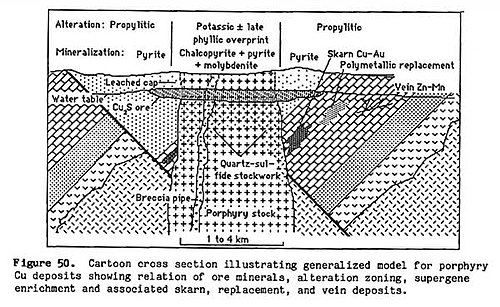 Characteristics of porphyry copper deposits include:

Copper is not the only metal that occurs in porphyry deposits. There are also porphyry ore deposits mined primarily for molybdenum, many of which contain very little copper. Examples of porphyry molybdenum deposits are the Climax, Urad, and Henderson deposits in central Colorado, and the Questa deposit in northern New Mexico.

The US Geological Survey has classed the Chorolque and Catavi tin deposits in Bolivia as porphyry tin deposits.[18]

Some porphyry copper deposits in oceanic crust environments, such as those in the Philippines, Indonesia, and Papua New Guinea, are sufficiently rich in gold that they are called copper-gold porphyry deposits.[19]